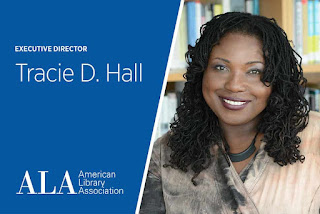 “The American Library Association is pleased to announce the appointment of Tracie D. Hall as its executive director, effective February 24, 2020. Following a nationwide search, Hall was selected to succeed Mary W. Ghikas, who has worked for ALA since 1995 and served as executive director since January 2018. Hall is the first female African-American executive director in ALA’s history.

THE MISSION of Cornucopia of Rhode Island is to serve the library community of color.

OUR OBJECTIVES are to promote library services to people of color within Rhode Island and the development of librarians and library staff of color. These objectives will be met by:

1. providing a forum that encourages the exhange of ideas and the discussion of issues, problems and concerns of librarians and library staff of color;

2. mentoring librarians and library staff of color and encouraging librarianship as a profession to people of color;

3. promoting the development and delivery of multi-cultural collections, services and programs;

4. fostering outreach into the community across cultures and languages;

6. engaging in charitable and social activities; and

7. collaborating with other organizations to achieve similar goals.